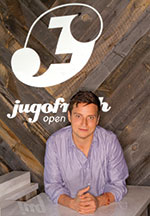 Getting healthy is an American obsession. And Matthew Sherman ’08, interdisciplinary studies, is at the forefront of a growing movement that may help make that arduous task easier and more efficient.

It’s all in the juice. But not just any juice. Cold-pressed juices with exotic names like Vamos Green, Goji Lemonade and Coco Verde.

At JugoFresh, Sherman’s burgeoning Miamiarea business, these juices are created with fresh fruits and vegetables in an extraction process that emphasizes quality and care over speed and pasteurization. The process is time-intensive, but the result is a dizzying array of healthy and flavorful drinks that fly off the shelves at the company’s flagship store in Miami’s South Beach – along with an array of smoothies and raw and vegan foods.

The JugoFresh juices are also the building blocks for comprehensive body cleansing regimens that Sherman has devised for athletes and ordinary folks alike.

Sherman squeezed into the juice business almost as gradually as he makes his products. He began first as a basketball coach, and then as a trainer working with individual athletes. But exercise alone, he says, wasn’t getting the job done for his clients – especially those who had unhealthy diets.

“It was just way too narrow a way of helping them,” observes Sherman, who eventually dove into holistic health training, got certified, and started concocting juice cleanses for clients. Eventually, his juice cleansing business got much bigger than his personal training business. Clients even clamored for the juice all by itself, and JugoFresh was born.

“It really took off as a business,” says Sherman, who now employs 34 people and is looking to expand JugoFresh with a larger dedicated production facility and at least two new locations in Miami in 2013. JugoFresh has also been a hit with media outlets in South Florida, who have raved not just about Sherman’s product, but the positive energy and popularity that he and his colleagues bring to the task of healthier living.

“It’s 20 minutes until closing time at JugoFresh,” wrote Miami-based website Ocean Drive shortly after the opening, “a gleaming new juice bar just off West Avenue, and the line is nearly out the door.”

Sherman says that the cold pressing process – using only fresh ingredients – is the essential element in his approach to juice. Because the fruits and vegetables are pressed, rather than merely chopped, the process keeps the maximum number of nutrients in the juice.

The JugoFresh founder first encountered cold pressed juice during time he spent at the Holistic Natural Health Institute in Hawaii, where Sherman observed the Gerson cancer treatment (which relies heavily on a fresh juice diet) being administered to patients and concluded that its potential benefits might be more widely applied.

“I saw the difference it made in people’s lives,” Sherman says. “And the difference that it made in mine. That’s why I got into juicing. I thought, ‘Why would people wait until they have cancer to do this for themselves?’”

Sherman says that a foundation for his success as an entrepreneur was laid in the shared qualities of his education at Friends School of Baltimore and at UMBC.

“I graduated with a degree in interdisciplinary studies,” says Sherman. “And something that was preached in that program, and in a lot of my classes at UMBC, and also during my experience before that being part of a Quaker community, was to constantly challenge the status quo, and look at things through multiple lenses.”

Sherman adds that another element of his education at UMBC and at Friends School was “a strong commitment not just to an end goal, but a process.”

So how do you create a drink that’s good for you and tastes good? Know that the cucumber, romaine, pear, kale, chard, ginger, lime and Himalayan sea salt that make up the “Green Montaña” will work together on the taste buds? That same willingness to innovate and challenge oneself from a firm base of knowledge also applies to concocting the flavors of JugoFresh.

“As far as flavors, I get pretty inventive,” Sherman says. “But I have a really strong idea of what things are going to taste like before the product is even put together. I can feel it, taste it, know how it’s going to react… But a lot of our flavor profiles are classic flavor profiles that have never been applied to juice. ”