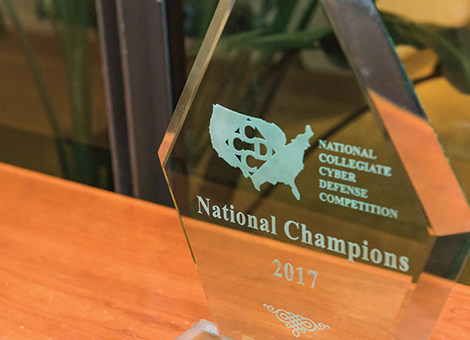 UMBC’s Cyber Defense Team took first place at the 2017 National Collegiate Cyber Defense Competition held in San Antonio, Texas in April, defeating nine other regional winners from across the country in a contest to protect their networks from cyber attacks and threats efficiently and effectively.

“We are as excited about the national cyber defense competition as we are about an NCAA athletic competition,” says UMBC President Freeman Hrabowski. “UMBC is developing brainpower to protect our nation and build the economy in the Baltimore region… Our campus is an ecosystem for cybersecurity talent development.”

Cyber Dawgs’ faculty advisor Charles Nicholas, professor of computer science and electrical engineering, explains that the competition puts the team in a realistic attack scenario, requiring them to use resources and work together to keep their network accessible and make sure systems are not brought down by hacks or cyber attacks.

“We are absolutely ecstatic with our win at Nationals. We have worked very hard to be the first team from the Mid-Atlantic region to win nationals,” said Christian Beam ’18, computer science.

In early April, the Cyber Dawgs beat teams from Towson University, the University of Maryland, College Park, and Drexel University to place first in the Mid-Atlantic Collegiate Cyber Defense Competition, solidifying their spot in nationals.

In May, the UMBC Chapter of Black and Latino Alumni (CBLA) gathered for what has become a highly anticipated event – the Legends of Excellence Award Brunch. Held once every five years, the event acknowledges the extraordinary contributions of faculty and staff who have made an impact in the lives of UMBC’s African American and Latino students during their tenure at the university.

“This was an outstanding slate of award winners, and it is fitting that they are being honored during UMBC’s 50th anniversary year,” said Stanyell Odom, director of alumni relations, who  helped CBLA with planning the event. “They represent grit and greatness, and it was wonderful to have so many alumni come back to campus to recognize the extraordinary impact they’ve made in the lives of hundreds and thousands of fellow Retrievers.”

Through this event and others, the CBLA supports the Second Generation Scholarship and the Esperanza Scholarship. Both scholarships provide support to students who meet minimum GPA standards, are involved in community service, and have demonstrated a commitment to the advancement of minorities.

Read more about Simmons in this issue of UMBC Magazine.

50th Anniversary and Beyond

As the 50th anniversary year comes to a close, UMBC continues to have much to celebrate – including record numbers of alumni and campus community participation in events and giving all year long.

During last fall’s 50th Anniversary Celebration Weekend, September 16-19, more than 3,300 people attended a range of special events on campus, including a Roots of Greatness Luncheon, GRIT-X talks, Stoop Stories featuring our earliest graduates, a fireworks show with the UMBC Symphony, a celebration of Founders Day, and more. In the months preceding that, hundreds of alumni also attended special events at Light City Baltimore, a Fab Four Reunion, and elsewhere, a dramatic increase over past years.

Linda Dunn ’71, history, who travelled from Delaware to take part, said she enjoyed a number of events throughout the weekend, including the Fab Four dinner.

“At the end of the dinner, they had various people give little vignettes about what they remembered about UMBC, and it was very touching and well-thought-out,” she said. “It served as a wonderful memory to hear all about the things you hadn’t thought about in a long time. It made me smile.”

The “Grit & Greatness” of the 50th also sparked an increase in giving, with a 40% increase in alumni giving at the end of calendar year 2016 over the previous year. Longtime donor and former Alumni Association board of directors member Brian Cuthie ’84, M.S. ’94, computer science, says it just makes sense to support his alma mater.

“I really feel like I owe UMBC a lot. Whenever I’ve been involved in the campus, I’ve felt like everybody is so generous. That, to me, is a sense of obligation,” he said.

In a video released after the Celebration Weekend, President Freeman A. Hrabowski thanked the entire UMBC community for its support and participation, saying, “We’ve laid the foundation… and now we’re ready to begin the next 50 years.” Rear Admiral Sylvia Trent-Adams, Ph.D. ’06, public policy, has been named acting Surgeon General following the resignation of former Surgeon General Vivek Murthy. The April appointment is the latest step in a career focused on improving access to care for poor and underserved communities. Prior to her role as Deputy Surgeon General, she served as Chief Nurse Officer of the U.S. Public Health Service (2013-2016), and before that held positions in the Department of Health and Human Services, the HIV/AIDS Bureau, and the Commissioned Corps of the USPHS. She also served as a nurse officer in the U.S. Army.

Photo courtesy of the U.S. Department of Health and Human Services.

Wish You Were Here! More than 60 alumni wrote 1,400 personalized notes to admitted students in April, giving a new crop of potential first-year students a true Retriever welcome. Top: On-campus alumni gathered to write postcards together. Middle: “As an alumna, I was overjoyed to participate in such a warm and welcoming endeavor,” said volunteer postcard writer Catrice Greer ’13, English. Bottom: Current students from the Center for Women in Technology also mailed notes to potential CWIT Scholars. 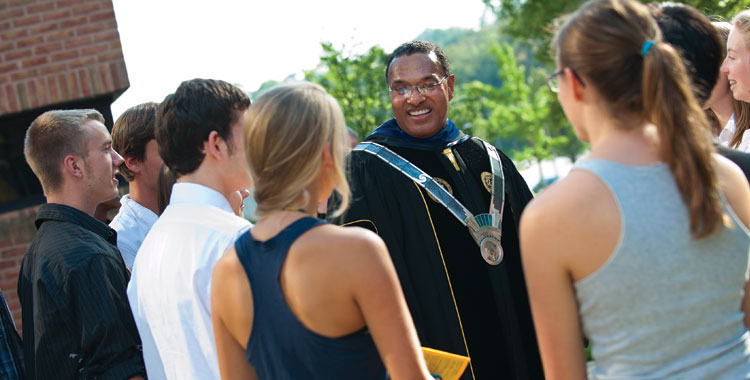