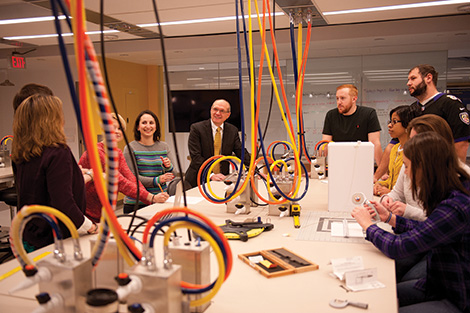 UMBC’s leadership in fostering the success of students seeking degrees in the sciences, technology, engineering and math (STEM) was highlighted in October when the National Institutes of Health (NIH) announced a groundbreaking series of awards totaling more than $18 million for the university.

The awards were part of a $240 million, five-year NIH investment to enhance diversity in the biomedical research workforce called Building Infrastructure Leading to Diversity (or, BUILD). Bill LaCourse, dean of the College of Natural and Mathematical Sciences, and UMBC Provost Philip Rous, together serve as the award’s principal investigators and will direct the STEM BUILD@UMBC initiative.

Unlike programs that focus on supporting students at extreme ends of the achievement curve, STEM BUILD@UMBC will focus on high-potential students who are at risk for not completing their STEM degrees but who, with extra support, are likely to succeed. The university will collaborate with five community colleges, Gallaudet University, and the University of Maryland School of Medicine in this initiative, which will combine innovation with the leveraging of effective components of existing UMBC programs to create a multifaceted new student support model. John W. Dorsey, the third Chancellor of the University of Maryland, Baltimore County, passed away in July at the age of 78. Dorsey died at his home in Laurel of respiratory failure.

Dorsey was named as UMBC Chancellor in 1977. He came to UMBC from the University of Maryland, College Park, where he had held a number of academic leadership positions in the 1970s, including Vice Chancellor of Administrative Affairs and Acting Chancellor (1974-1975). Dorsey served as Chancellor at UMBC until 1986, overseeing nine years in which the university boosted its enrollment and significantly raised its academic profile.

A key element in Dorsey’s legacy was the stability he brought to a university whose development after its founding in 1966 had not been without growing pains, including the resignation of the university’s second Chancellor Calvin B. T. Lee under acrimonious circumstances in 1976.

Dorsey arrived at a moment when UMBC was under the constant threat of a significant revision or even termination of its mission as a public research institution. One of Dorsey’s most notable moments as Chancellor came in 1981, when local media reported that Sheldon Knorr, the executive director of the Maryland Higher Education Commission, was preparing a proposal that UMBC be shut down and converted into an industrial park.

The reports created a firestorm on campus, and Chancellor Dorsey rallied the university community at a large public meeting held in the UMBC dining hall with a stinging rejection of the scheme – which never reached formal consideration

UMBC President Freeman A. Hrabowski, III, observes that Dorsey “was the protector and supporter of UMBC. When the university found itself and its future being questioned, he was the one who said we must protect this great institution because the people of the state need UMBC.”

Dorsey came to the job with an intimate knowledge of Maryland’s university system and its politics and tensions, and he usually preferred taking a quieter approach to building his lasting achievements on campus. Dorsey’s “wonderful, understated approach” was a key to his success, says Hrabowski, who adds that “it’s easy to see why the university went to the next level under his strong leadership.”

Shortly after his appointment as Chancellor, Dorsey commenced a sweeping internal reorganization of the university’s administrative and political governance which simplified and clarified UMBC’s structure and paved the way for sustainable growth. And far from shutting down or altering its core mission, UMBC’s enrollment grew steadily over Dorsey’s nine-year tenure and surged past the 6,000 mark in his last year as Chancellor.

Upon his departure from UMBC in 1986, Dorsey returned to College Park as a special assistant to President John S. Toll. He also returned to teaching economics and retired from College Park in 2001.

An alumnus of College Park with a B.S. in economics (1958), Dorsey also had a master’s degree and a doctorate in economics from Harvard University.

Each year at Homecoming, UMBC’s Alumni Association bestows its Alumni of the Year awards to notable graduates of the university, and the select group of this year’s honorees was among the most impressive yet.

This year’s ceremony was held in the recently-opened second phase of the university’s Performing Arts and Humanities Building, and the 2014 award winners included:

Donna Lewis ’86, English (Humanities), a cartoonist with the Washington Post News Service and Syndicate and the unit chief of the Office of Professional Responsibility, Transportation Security Administration in the Department of Homeland Security. 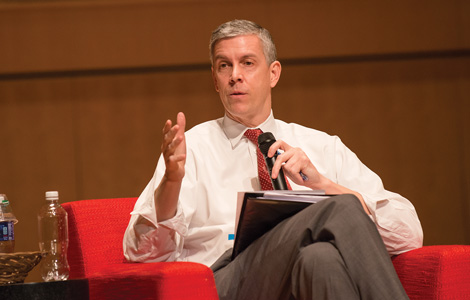