Setting the Bar — The Impact of a Judicial Internship

As a student in Towson High School’s Law and Public Policy program, Randall Ainsworth ’19, history and philosophy, created a peer mentoring program for other young African American men there. In a predominantly white school, Ainsworth envisioned a support system for students who were struggling to succeed as they dealt with violence and poverty at home and then were placed in an environment that expected them to conform. The group sought to overcome their circumstances through mentorship, brotherhood, and community service.Their motto, Ainsworth says, was, “Once you’ve been restored, go back and restore your brother.”

After a four-semester internship with Chief Judge Wanda Keyes Heard ’79, political science, of the Circuit Court for Baltimore City, 8th Judicial Circuit of Maryland, Ainsworth has wrestled with what restoration might look like for each person making their way through the criminal justice system. In his first semester, Heard handed him a thick file for someone in prison. His task was to review a request to have a sentence reduced.

“Just so you know, this is a real person. You have to look through here, see what his record is, and tell me what to do,” the judge told Ainsworth, he recalls.

These types of hands-on tasks with real-life application are par for the course for an internship with Heard. In her 20-year career as a judge, she’s mentored 26 interns from UMBC alone.

Ainsworth says that Heard has been instrumental in holding open the door for the next generation of lawyers and judges. “She has, like, an army of little children, just all over the place, doing good work.”

Getting a foot in the door

The summer before Ainsworth began his studies at UMBC, he met Heard serendipitously at an award ceremony, where he was being honored for his high school mentoring program. Hearing about Ainsworth’s background and his acceptance to UMBC, Heard approached him with her business card and told him to get in touch, despite the fact that he hadn’t even started college yet.

“When I was coming along, the most frustrating thing was not being able to get experience,” says Heard, sitting in her wood paneled office downtown. Her mother was a nurse and her father was an educator. “But there were no lawyers in my family. There were no lawyers around that looked like me—African American and a woman—and I found it very, very difficult to get my foot in the door.”

While Heard was at UMBC in the ’70s, she went to Capitol Hill to search out internships. Discouraged but undeterred by warnings that she wouldn’t be able to secure a position, Heard approach Shirley Chisholm, the first African American in Congress and the first woman and the first African American to seek a presidential nomination from one of the two major political parties. Chisholm’s mentorship was invaluable, says Heard, who learned all the steps for how a bill gets from point A to point B, solicited co-sponsors for Chisholm’s bills, and eventually drafted her own bill—to establish a stipend for interns to receive compensation for their work.

Seeing representation mattered, and Heard has strived to set a similar example for the interns who work in her office but also for younger children, who come into the courthouse with their classmates and recreate mock trials for scenarios like Jack and the Beanstalk. In a recent rendition, Ainsworth participated in the role of Jack, who was on trial for breaking into the giant’s house and stealing his goose that lays the golden eggs, and ultimately attempted murder of the giant by cutting down the stalk that held up his house.

“We bring in kids from the area’s public schools and nonprofits…they are the attorneys, they serve as the judge, they’re the jurors,” says Heard. “And we show them the jobs like the clerk and the sheriff…to encourage them into careers in the law.”

“If I show young people,” continues Heard, “that there’s an alternative to what they see on the street by bringing them to the courthouse and showing them jobs or a female judge, I’m offering them an opportunity that I may not have had. That’s where my mentoring Randall comes in. He comes from a rough background, and a very rough neighborhood, but he’s brilliant. You only need to talk to him. Give him an assignment. And his brilliance shines through.”

Heard, says Ainsworth, has been instrumental in setting him on this path. And from Heard’s perspective, “I truly feel like a mentor, because he’s outgrown my office.”

Ainsworth has been struck and shaped by the way Heard’s passion for the law translates as a passion for helping people in the system. “She does this whole thing with her probation that’s a little different, where she gives people stipulations, but the stipulations are things like, ‘Leave town. Get a job. Go to school,’ you know? And you’ll see people that you would think are hardcore criminals come in six months, a year later, and they’re completely different people.”

The judge has also taken time with Ainsworth to go through his law school applications, providing a much needed voice of experience. “I always wanted to be an attorney, but no one in my family and no one that’s connected to my family has ever done anything like this before,” says Ainsworth, unconsciously echoing Heard’s own words about her first foray into studying law.

“My relationship with the judge has definitely opened doors to opportunities that I didn’t think were possible,” continues Ainsworth. “Having the opportunity to gain experience with the law and network with leaders in the legal field has made me confident that I can succeed as an attorney.”

Other formative experiences shaped Ainsworth’s pursuit of this career. On the way home from volunteering at a nursing home with members of his peer mentoring group, Ainsworth says, someone called the police on the group as they walked into a convenience store. “You know, we’re being orderly,” Ainsworth remembers explaining. “We’re not doing anything. Why are you calling the police?” Ainsworth managed to deescalate the situation, but for him, the experience underscored that “African Americans do not have the same experience with the law and the justice system as other groups of people in America.”

Ainsworth, who after graduating will work as a legislative aide in the Maryland General Assembly and apply for law school, sees his career goal clearly: “I want to help reverse a cycle of historical injustice, create opportunities for others like me, and make it easier for African Americans to have faith that the law will be just and treat them fairly.”

All photos, including header, by Marlayna Demond ’11. 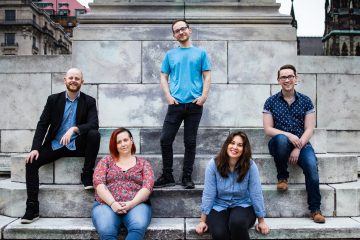