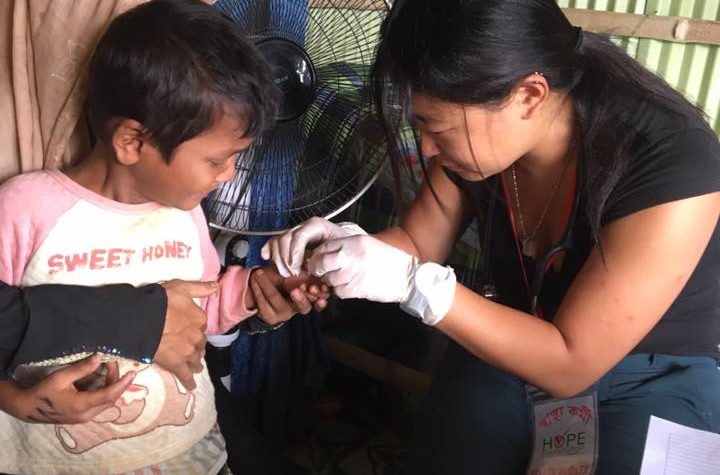 Coco Tang’s medical missions around the world would sound like a summer action movie if they weren’t a matter of life and death.

Just behind the front lines of the battle of Mosul in Iraq, Tang ’14, visual arts, history, and political science, dressed wounds of civilians and soldiers during the day and slept under windows rattling from shelling at night.

Dropped by Global Outreach Doctors into a camp surrounded by violent uprisings in the Democratic Republic of Congo, Tang—a specially trained emergency medical technician—helped assess the victims of sexual violence perpetrated during the country’s 40-year war, then got stranded with one of her crew, a few locals, and nearly nonexistent cell service. After four days, a plane finally showed up.

Tang helped women, usually arriving by mule, deliver their babies at 10,000 feet in Ethiopia. She treated Rohingya Muslim refugees in a Bangladeshi camp. Ebola in Sierra Leone, earthquake in Nepal, typhoon in the Philippines, Tang was there for them all. She has worked or volunteered as a contract paramedic with Global Rescue, Medics Without Borders, All Hands Volunteer, and other nongovernmental organizations. After a few months as a camp medic in Afghanistan, she provided medical care at a San Diego-based coronavirus quarantine ward, then started 12-hour shifts in March supervising nurses on a COVID-19 surge floor in New York City.

If there’s a humanitarian emergency around the world, Tang heads into the eye of the chaos.

“I’m a bit of an adrenaline junkie,” Tang says. “I wish I could say it was all altruistic reasons, but I like being in the thick of things. I like knowing I was part of a historical moment, and that I had something to contribute. I feel strongly that if you have the ability to help, the responsibility should be on you to do what you can.”

A Life in Extreme Medicine

A management consultant by profession, Tang takes leaves of absence to volunteer around the world on medical missions. She speaks Mandarin, Arabic, Japanese, German, and Russian. With an MBA from George Mason and a master’s degree in international security from Georgetown University, Tang has nearly finished a master’s in extreme medicine from Exeter University. And though “extreme medicine” may sound like a metaphor for her life, Tang explains that the degree focuses on medicine in extreme environments, such as deserts, jungles, polar ice, and the ocean. Eventually, she wants to go to medical school.

Tang started at UMBC as a visual arts major, but her time spent studying abroad led to learning more languages and history. She found her niche in the global studies program. When looking for a job during college, she started training as an emergency medical technician simply because it paid more than most undergraduate gigs, Tang says.

On a Boren scholarship in Jordan, that training came in handy when she witnessed the Syrian refugee crisis. She volunteered as a medic, transporting wounded Syrian refugees from border crossings to field hospitals. Originally slated to study water rights, Tang changed her topic, and ended up filming a documentary about Syrian refugees fleeing ISIS and the Bashir Assad regime for her 2013 URCAD project.

Her experience in the refugee camp, which melded her travel bug, her yen for danger, and her urge to help, cemented her future as a humanitarian medical worker. She returned to Jordan for a year on a Fulbright scholarship in 2014.

“I immediately recognized that her writing and her level of analysis was incredible,” Starkey says. “She’s that rare student who can move across the curriculum. She might be a kind of genius.”

Tang’s courage and hunger to travel, Starkey says, leads her to dangerous spots. “She’s uniquely talented and very, very dedicated to going to places that are the most grim in the world and trying to help,” Starkey says. “She does have a deep desire to go where no one has gone, not only geographically. I think that’s why she gravitates toward medical work. She has nerves of steel, an unflappability, and a curiosity.”

Eyes and Ears Around the World

In 2018, Andrew Lustig, founder and director of Global Outreach Doctors, a humanitarian medical organization, chose Tang as one of their 330 volunteers worldwide and she’s been working with the organization ever since.

“She quickly became a great asset,” Lustig says. “She’s worked in areas that require an understanding of security, a strong understanding of business and guiding people, she has humanitarian medicine experience, she’s a great networker, a logical thinker, she’s exceptionally organized, which is required in places where there’s mostly chaos. She is basically our eyes and ears for the projects.”

Lustig described Tang’s mission to Congo. The medical crew landed in Rwanda, and had to go by air over the border, deep into remote Congo, where there was danger of violence, kidnapping, rape, illness. Tang, he says, knew the team needed to release tension and bond. She organized a trip to see the gorillas in Rwanda, Lustig says, which was perfect for the task.

“She has an ability to find something social, with laughter and peace in between all the tension, because otherwise you’ll burn out your team,” Lustig says.

Coming to Peace with Fear

When Tang needs a break, she turns to playing her violin or Chinese zither, painting or drawing, or extreme sports—mixed martial arts, skydiving, SCUBA.

“If you’re standing on the edge of an airplane and have to make a decision to throw yourself out, there’s something about the Zen of it, coming to peace with that kind of fear, and overcoming it, it’s a good mental exercise for me,” Tang says.

“Space doctor.” She’s not kidding. “If there ever is an opportunity for doctors to participate in space missions, or if there ever was a colonization mission where you don’t come back? I’d do that.”

All photos courtesy of Coco Tang. 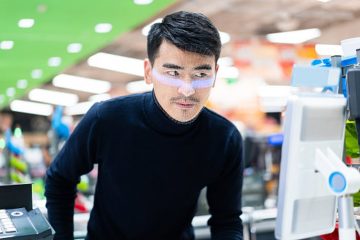