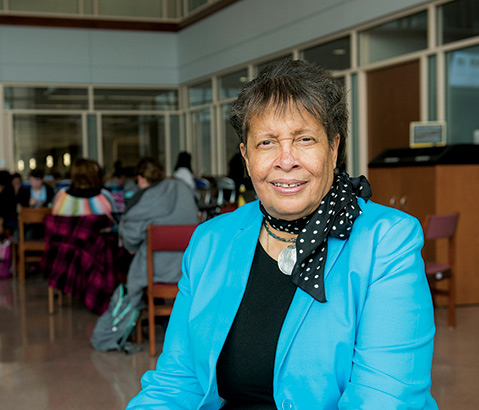 During her years as an undergrad at UMBC, Karen Sutton ’97, history, would constantly see Simmona Simmons ’74, American studies, working quietly in the library. Even today, when she stops in the Albin O. Kuhn Library, she sees Simmons and smiles, for even the sight of the librarian still inspires Sutton to pursue her goals.

“I (wanted to) become a librarian vicariously through her,” says Sutton, a lecturer at UMBC. “I plan to use the skills Simmona taught me to inspire others.”

Despite the major impact she tends to have on the lives of others, Simmons has always kept a low profile. Described as modest, quiet, and unassuming, Simmons maintains that people should be measured by their actions. And after more than fifty years of service at UMBC, she certainly has a lot to be measured by, quietly inspiring others – sometimes without even knowing it.

This year, Simmons, along with three other UMBC faculty members will be honored with the Legends of Excellence Award – a tribute that acknowledges faculty members and staff who have made an impact on UMBC’s African and Latino students. Serving on the library staff since the school opened in 1966, and through her role as library liaison, Simmons has had the opportunity to work with countless staff and students.

“My tenure at the Albin O. Kuhn Library & Gallery has been rewarding because I have had the opportunity to work with students, faculty, and staff, answering interesting queries and assisting with their research needs,” she says. “I have always loved working with the students; as they discover new information and as they mature, it is exciting to contribute a small part to their success.”

Simmons is also one of the founders of the UMBC Women’s Center which first opened in 1991, serving on its advisory board. Along with other founders, she pressed for the Center to be on the “footpath” of campus, ensuring that it be, as it is now, centrally located in The Commons for students to easily access.

“What I have learned from Simmona,” says Jess Myers, Director of the Women’s Center, “is that the work and its impact is most important and getting credit is less important.” Though she keeps out of the spotlight, Simmons is hardly inaccessible.

Through these various roles on campus she has made herself available to the student body, and she thrives on the role of mentorship in bettering one’s career. She often encourages students to seek out community and role models.

“Coming from a background where your parents aren’t educated,” says Simmons, referring to her own childhood, students need to find people who can help them make their way through academia.

“Identify a person that is doing what (you) want to do and hitch (your) wagon to that person,” she says. “Just go for coffee with them and ask them five questions.”

Simmons cites Dr. Gloria Oden, poet and former professor in the English department, as her professional inspiration even across the disciplines, recalling Oden’s constant encouragement to strategize and read better sources, and even to pursue writing for various publications and encyclopedias as a means to continue on in her professional development.

Everyone relies on the same tools to pursue their goals, regardless of family background or academic interests. And anyone can encourage others to use these tools: a poet from the English Department inspires a librarian in the American Studies department who inspires an instructor in the African American studies department.

Simmons has made sure that she can be a resource for students and even for other faculty, learning from those who have helped her in her career how to best help others.