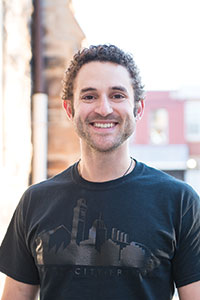 Create Your Own Theatre Festival
—With Zach Michel ’09, geography and environmental systems, president of the Charm City Fringe Festival

Zach Michel ’09, geography and environmental systems, arrived at UMBC not quite knowing what career he wanted to pursue, but confident that “this was the right place for me to figure it out.” Michel’s enthusiasms included the performing arts, economics, and the great outdoors. Eventually he settled on geography as a career path, and landed a job with the National Geographic Foundation after graduation.

Yet Michel never lost his passion for performing, including acting and writing short films. He became involved with the Capital Fringe Festival in Washington, performing in “a couple of really successful shows.”

When reorganization at National Geographic left him “without a job to fit into,” Michel moved back to Maryland to
regroup. He and longtime friend Michael Brush – who shared Michel’s interests in writing and performing (and an unforeseen job search) – joked about putting on a show to fill their unexpected free time, but the joke turned serious when the duo decided to create a full festival.

“We wondered why DC had a ‘fringe’ festival for alternative performance artists and adventurous audiences and Baltimore did not,” recalls Michel. “So we decided it was time to start one.”

So Charm City Fringe Festival was born. Four years, and four festivals later, its president and chair shares secrets of how to create a successful arts festival from scratch.

“Running a full-on festival, especially a startup, requires investing just a crazy amount of time and work,” says Michel. “You simply have to decide that it’s going to be fun and that you’re passionate about making it happen, and then just dive in and don’t look back.” “Talk to anyone and everyone you can,” advises Michel. “A festival is essentially an umbrella organization for many different performers and groups, so you need to become familiar with all the arts going on all across the city. You also need to build support with the community at all levels – not just artists, but also your region’s municipal arts councils and offices, as well as local businesses. Michel also built out his network by asking every person he spoke with to recommend someone else for him to meet.

Michel says it takes one year to put on one event. Maybe double that if you’ve never done it before. The key to success? Start small and build in plenty of lead time. When you have a “grand, impassioned vision” of the perfect event, it’s hard to hold back from doing everything all at once. “You really need to pick just one piece of that vision, and show that you can pull it off. After that, you have credibility. Which means you get to do it again, and do more.”

Festivals have a lot of moving parts, and need many hands to keep those parts moving smoothly. Since most festivals
are run by nonprofit organizations, this means those hands will mainly belong to volunteers. “Sometimes I feel like half my job as festival president and chair is finding and coordinating volunteers,” says Michel. “This past year we had 12 venues; each one had a box office to run, things to set up, break down…. Volunteers can be the make or break aspect of running a successful festival.” Michel recommends calling for volunteers early and often. And once people do commit their time and services, make it a fun experience, and let them know you couldn’t do it without them.

Step 5: Keep Calm and Do It Again If preliminary research shows that the block-front corner cabinet you inherited from Great Aunt Harriet has potential value, it’s time to call a professional like Harrison.

When something goes wrong – and things will inevitably go wrong – be strong. “Staying calm, or at least being able to appear like you’re staying calm, is really important. Practice your deep breathing,” says Michel. The thought inside the head of every festival veteran, he observes, is “you wrap up the final show, and then you immediately panic that you only have 358 days until the NEXT opening night.” Tie up the loose ends of this year, take a month off, then have a post-mortem. That first night of the next festival will be here before you know it.