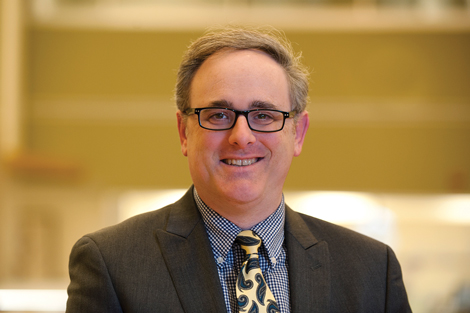 Rubin Rakovsky was an in-house auditor for a multinational accounting firm, but wasn’t happy with his job. “I was just a number there,” he says. “I wanted to feel like I was part of something.”

Rakovsky’s search for a more satisfying position led him to Elliot Lasson ’87, psychology. Lasson, the executive director of Joblink of Maryland, helped match him with a small real estate investment fund in Laurel that satisfied the young accountant’s desire to meet new people and participate in multiple aspects of the business.

“Employment is so central to who people are,” says Lasson, who moved into the leadership role at the Baltimore-based nonprofit six years ago. “[Rakovsky] was at a place in his life where he needed a change, and I was in a place I could help.”

Lasson traces his own interest in a career in human resources to his father, who was a clinical psychologist. He wanted to follow in his father’s footsteps, but sought to apply that curiosity about human behavior to a business environment.

As an undergraduate at UMBC, Lasson was able to meld his dual interests by concentrating his course work on organizational psychology – the scientific study of human behavior in the workplace.

“I tend to be a very focused person. I determine where I want to go and I find a path to get there. I didn’t feel I needed to turn back or second guess. I knew what I wanted,” says Lasson, who lives in Baltimore’s Mount Washington neighborhood with his wife, Sheryl.

Lasson also received a master’s degree and a doctorate in organizational psychology at Wayne State University in Detroit. He worked for private firms in Michigan and Maryland, and eventually for the state of Maryland, where he heard through some friends that Joblink was looking for a new leader.

He recalls liking how the organization – which works primarily works with members of the state’s Jewish community but is open to all – was still young and growing.

“I saw an opportunity to build something there,” says Lasson, who also earned a second bachelor’s degree in Talmudic Studies from Ner Israel College in Pikesville while attending UMBC.

Joblink has helped more than 400 people find new jobs since he took over – and has provided assistance to another 2,400 people seeking work. All of Joblink’s services are free to job applicants, employers and search firms. Lasson says that one key is to look beyond resumes and minimum job requirements, and take into account an applicant’s personality and goals, as well as the business’ culture, when matching job seekers with prospective employers.

Lasson identifies a few key elements for a successful job search. He urges job seekers to develop new skills by volunteering in a preferred field or helping with projects outside their current department. They should focus on “portable skills,” especially in computers.

“That is really critical,” says Lasson, who also serves as a member of the Governor’s Workforce Investment Board, a panel that advises the state’s executive branch on how to best address Maryland’s workforce needs. “Tech skills are a prerequisite for most jobs these days,” he says.

Lasson has also extended his vision to higher education, and has returned to UMBC to teach graduate-level psychology courses as an adjunct professor.

“He’s got a soft spot for this school it seems,” says Ted Rosen, director of UMBC’s industrial/organizational psychology master’s program. “He is really dedicated to his students and they really appreciate him.”

Lasson says it’s been especially hard to find people good jobs the past few years, “but with a little luck I can usually help. I find it very gratifying.”

There is hope that comes along with the hard work, he adds. “People should never give up,” he says. “Keep looking.”