The UMBC journey of Clolita Vitale ’75, theatre, eventually took her to a top leadership position at the university. But one of her first steps was moving into one of UMBC’s then-new residence halls as a student.

Vitale vividly recalls the thrill of those first days of dorm life at UMBC. When she arrived at the university, the first dormitory building had not even opened. But as soon as Dorm I (now “Susquehanna Hall”) was ready in autumn 1970, Vitale was one of the first to move in.

As a student and then as a resident assistant (RA), Vitale lived in all three dorms built during her years as a UMBC student. “There was a certain excitement about being the first ones in the dorms,” she says. “UMBC was a little ahead of the curve back then.”

UMBC’s dorm rooms were relatively modern for that era, equipped with phones, individually controlled heat and air conditioning, and bathrooms shared between two rooms instead of communal showers and toilets.

Vitale remembers UMBC’s first resident students as a close-knit group who gathered together regularly outside in the mini-quad between the buildings, in each dorm’s lobby, or in her senior year, on the patio of what was once known as Dorm III. (Now known as Patapsco Hall.)

“We used to be out there all the time,” says Vitale, who after graduation held jobs in UMBC’s purchasing department, and then as director of procurement, before eventually becoming an assistant vice president and general counsel for the university until 2007. In every case, that work kept her involved in the growth of UMBC’s resident student community.

Along with Mark Behm, who was vice president of administrative affairs from 1988 to 2005, Vitale was involved in the planning, design, and furnishing of each new residential project. She remembers choosing furniture and looking at fabric swatches. “It was kind of like designing your house,” she says. “We were pretty much involved in the whole process.”

She brought her own experiences as a resident student to the work. “I had a lot of interaction with students doing that,” recalls Vitale. “This is your university. How can we make it work for you?”

Milani worked in UMBC’s Office of Residential Life from 1978 to 1987, and for the last five years served as its director. A desire to enhance the experience for resident students was in his mind each time he answered an emergency call or scheduled a program.

“We stressed a community where you appreciate differences,” says Milani, who is now the director of administrative affairs in the College of Engineering and Information Technology. “We’re all different, but that’s okay. You respect one another and you take care of one another,”

Milani, who holds a master’s degree in counseling and previously worked on UMBC’s counseling staff, organized student workshops to help build community. Most notable was a student wine tasting held as part of an alcohol education program, but other workshops focused on leadership, dating, and racial sensitivity.

UMBC also expanded its housing options beyond dormitories during Milani’s tenure. Students clamored for apartments but had few options off campus. So UMBC built its own.

The first complex, West Hills, was designed as much to meet the needs of faculty or staff families, recalls Milani. The students who lived there were polled for recommendations in planning the Terrace and Hillside apartments.

“Student voices mattered,” Milani says. “We got our best ideas from students.”

UMBC’s transformation from a commuter school – once expected to have 20,000 day students – to a residential campus where 75 percent of freshmen now live on campus and students can reside in “living learning communities” has meant even more growth.

When Nancy Young joined the Office of Residential Life in 1986, UMBC offered 1,500 beds in its three 1970s-era dorms and the two apartment complexes. Now it boasts over 3,500 places in 31 buildings. She has overseen construction of virtually every residence since – first in the Office of Residential Life where she later became co-director, and since 2007 as vice president for student affairs.

Young says one of her priorities is to ensure every residence hall has “doubleloaded corridors” that require students to interact with fellow residents. She cites post-graduation assessments from students that recall fond memories of interactions with students with different life experiences and cultures. “The residence hall is where most of that cultural interaction takes place,” she says.

Both Milani and Young credit previous residence life directors Dave Herman and Clarence Robinson for fostering what Young describes as “a sense of an individual caring for students” that continues to this day under Kim Leisey, associate vice president for student affairs.

“We really are a culture of care,” Young says.

Milani concurs. “Since the first students occupied the residence halls at UMBC, there has been a cadre of professional staff and student staff who focused on creating and developing environments that fostered the academic, personal, intellectual, cultural, and social development of our residents,” he observes. “In this sense, every generation has stood on the shoulders of those who came before and further developed the system that they inherited.”

Young observes that these values have endured. She recalls a retreat held before UMBC’s 40th anniversary during which students, alumni, faculty, and staff discussed what they valued about their campus experience. Students from each decade chose the same core values: family, growth and opportunity, diversity, superior academic achievement, and pioneering spirit.

“We have become the place we are, reflecting our values from the 60s that continue to weave through all 50 years of our experience,” Young says. “Students matter. I want them to have all the benefits of a large research university with all the warmth and personal care and attention of a small liberal arts college. For me that’s what UMBC is.” 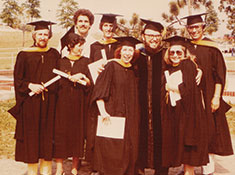 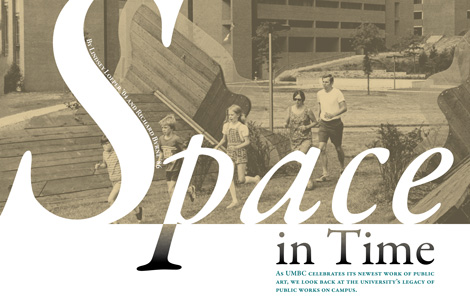