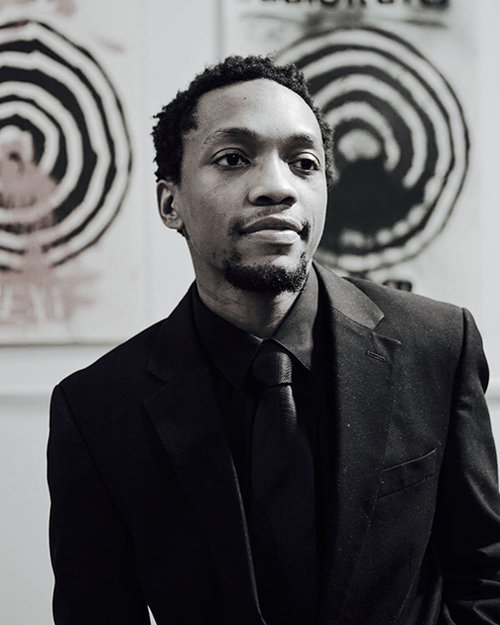 Every so often, we’ll chat with an alum about what they do and how they got there. We recently caught up with Charles Mason III ’14, graphic design, an interdisciplinary artist and curator working in Baltimore. His latest exhibition, “Two Lane Stories,” features the work of six black male artists working across Maryland. It opened last Friday at Gallery CA in Greenmount West, and runs through August 31.

Tell me about how this project came about: what made you decide to curate the show? I’ve been working on this exhibition, “Two Lane Stories,” for about a year now. It started in the spring and summer of 2016 […] I was working at Morgan State University, and me and Professor E.L. Briscoe would have conversations about day-to-day life, artists, artists of color, black artists…He gave me this book called 30 Americans to read, and it was about a collection of works from…men, women, all types of people of color. And I was really inspired by that. I was like, “I’m gonna do something talking about the obstacles [facing] black male artists.” […] Originally I did want to do 10 artists. It didn’t work out that way, but I was able to work with and interview six black male artists local to the state of Maryland. […] I felt like it was important, and I felt like telling the side of their story, how they navigate through the systems of being a black artist, and being a black person, and being a black man…how they’re able to convey that in their work…and how it influences them and whether it’s an obstacle.

In choosing these artists, I was able to reach out to mentors, brothers, uncles, these people that have been influential to my work and my process. [At UMBC] I had a lot of mentors, and a lot of friendships there, but for me, being a black man, I didn’t have a lot of black male artist role models. So when I started to really go after this fine art life and really started to explore creating with painting, photography, design…I started to meet these different artists. When I worked at Morgan State University, I started to meet these really important black men artists who are here in this state, who are very influential.

I went to grad school for a little bit, right after I graduated from UMBC. I went to [the Parsons School of Design], and I was only there for three months, but there I was also introduced to a lot of different artists of color. Going to the Brooklyn Museum, going to the Queens Museum, going to all these different places, I was exposed to so much. And for me personally, it was very important that I did that. Even though I didn’t stay, I got to see fine art through a different lens. For so long, I thought fine art was this very linear thing, when it’s not. I knew abstraction [and expressionism] existed, I knew all these different things existed, but for so long I had not…gone after it. I thought a drawing just had to look like a drawing. Like if I drew a chair, it had to look like that chair. It couldn’t look like anything else, it just had to look like that chair. And that kind of followed me, for so long, but when I was able to go to grad school, it was like…wow. This is what I’ve been missing. This felt like home, like I always should have been doing this.

Could you tell me more about your own art? What motivates you to create? My own work, again, is a mix between different mediums. Depending on the message I’m trying to convey, my medium will change. Some people might look at that as a bad thing, or others might look at it as a good thing. I look at it as just me being interdisciplinary. I love fine art, but I know for a fact that depending on what I’m trying to talk about, a painting may do it more justice than a photograph, or a photograph may do it more justice than a painting, and so on. I think that’s so important to the way I create. I am so influenced by society today, and historical context. I’m influenced by what happened in the ’60s, the ’70s, the ’80s, the ’90s, the early 2000s, whether it’s from music or whether it’s what’s happening politically…I have to express myself, to get something out, because this feeling is so overwhelming [that] if I don’t create, if I don’t do something, I kind of feel stuck. I kind of feel backed up. It keeps me sane, almost, to create. I’ve done watercolors, I’ve done paintings, I’ve done photographs. Everything has its own tone, but it all ties in back to being…socially, politically, historically aware. Context…is so important to me, and these artists that I’ve interviewed are so important to me, because my practice is this one way, but my mindset is completely different than it’s ever been right now because of the conversations that I’ve had and how they’ve pushed me to be aware of what I’m doing. Once you’re aware, you can never go back. At least I can’t go back to what I used to do, or what I’m used to thinking or perceiving. [My] practice is constantly being influenced, because the work will come, but it’s all about the mindset that sets you apart from different artists. You can have 10 different painters, but all of them paint differently because of their experiences, because of their knowledge, because of their history, because of their culture. All these things are so important to their practice, and same with me.

You are headed off to Pennsylvania for grad school in the fall. What will you be studying and what draws you to it? I will be getting my M.F.A. in fine art, which is an interdisciplinary program at Pennsylvania Academy of Fine Arts. I applied to several programs throughout this nation and overseas…and was fortunate enough to get into five out of the six programs that I applied to. […] There were a lot of really good programs, and it was just about having the best scenario for myself. I mentioned that I went to grad school before, but I kind of went up there half-cocked, because once I graduated college, I really didn’t know what I wanted to do. [New York] was one of the greatest experiences of my life, but I left, and now I feel like I’m in a better headspace, a better mindset.

Were there any particular professors or courses at UMBC that had an impact on you? Tell us a little more about those. There were quite a few professors who challenged me in ways I hadn’t been challenged, who saw something, who were very approachable. [IRC director] Lee Boot was my mentor, a friend of mine, a really good friend who’s introduced me to these really phenomenal artists. I didn’t meet him until I became a McNair Scholar, and Cynthia Hill [and] Dr. April Householder were very influential to me as well, just pushing me. [Kwame Ansah-Brew taught] an African-American music class, but he was just so fun to listen to and to hear talk. […]

I was at UMBC longer than I should have been, honestly, but I figured, since I was here, I would learn different things that I’d always wanted to learn. I always wanted to learn the piano, and I had to literally, like, ask. Because I’m not a music major! I wasn’t a music major, so I had to ask, I had to talk to somebody and express to them that I really wanted to learn. And I did. I learned it, I had fun. I wish piano classes were a little more affordable, or I’d still be learning now. It was very influential to me. All these different people have been important to my growth overall, from undergrad to now. [A] professor by the name of Vin Grabill in the visual arts department, he was very influential. He was my mentor when I became an Undergraduate Research Award recipient. I had a lot of fun at UMBC, mostly because…I found people, and I found things and subject matter that I could get into. That was really important to me.

What’s your number one piece of advice for an incoming UMBC student? Have fun, and don’t rush the process. We get so caught up in wanting to graduate at a certain time, or just do something at a certain time…[You’re] going to learn so much from the classes that you really care about. You may be a biology major, but learn an important life lesson from an art teacher, you know? [We’re] so worried about graduating and finding that job that we forget to actually enjoy our undergraduate [experience]. I’m not even talking about partying and stuff like that…I’m talking about really having fun in the classes that you take. Even if you’re taking all math classes…you may not want to be an artist, but if you love art, take that class! If you love history, take that class. Because you’ll never get this time again, really, to be an undergraduate, to be that young person, just having that experience and being able to fail. And not everyone is looking at you to succeed all the time, because you’re still figuring it out. Even when you’re 30, you’re still trying to figure things out. […]

Creating a diamond takes a lot of pressure, and that pressure that you get from undergraduate or graduate school…is important to your development and you should have fun doing it. Take that time. Enjoy the process.