A team of researchers including UMBC’s Eileen Meyer and Markos Georganopoulos have found strong evidence of a striking astrophysical phenomenon: a supermassive black hole traveling away from the center of its galaxy at an incredibly rapid pace.

A scenario like this has been predicted for some time.

“The theory is great, but we’ve got to have some observations to see if our simulations are correct,” says Meyer, assistant professor of physics. Those observations are now in hand, with copious lines of evidence all supporting the team’s explanation.

“There have been previous cases of systems like this,” says Georganopoulos, associate professor of physics, “but ours is the most solid case.” Meyer adds, “It’s the only one I can think of where all the little pieces of evidence line up in favor of this scenario very specifically.”

When two galaxies with black holes at their centers merge, gravitational forces pull the black holes to the center of the newly-formed galaxy. The black holes spin around each other, gradually slowing down. This process releases gravitational waves – ripples in the fabric of spacetime that travel outward at the speed of light. Depending on the relative rotational speeds of the two original black holes, once they merge, the new black hole may be kicked out of the galaxy’s center by the gravitational waves.

Data collected by the Hubble Space Telescope and other sources confirm that the black hole’s speed and position – approximately 4.8 million miles per hour, offset from the center of its galaxy – are consistent with the team’s explanation that the black hole has been powerfully ejected from the galaxy by the force of gravitational waves.

First author Marco Chiaberge, research scientist at the Space Telescope Science Institute at the Johns Hopkins University, approached Meyer and Georganopoulos almost two years ago to help interpret the surprising data. Georganopoulos shares, “For me, the most exciting thing was to go from the raw data to building up a scenario – gradually realizing that the other scenarios are very implausible.”

Although alternative explanations are unlikely, the team still wants to collect additional observations to further confirm their interpretation. They’re submitting a proposal for time on the Atacama Large Millimeter Array, a powerful telescope in Chile that could help them answer remaining questions.

“At the same time that it creates the opportunity to solidify our model, it’s also an opportunity to falsify it,” says Georganopoulos, of the possible opportunity to use the array in Chile and the importance of remaining open to new interpretations of the data.

Either way, it will be exciting research. “Even if it doesn’t turn out the way we’re expecting,” says Meyer, “this is still a strange and remarkable system that needs to be studied.” U.S. Librarian of Congress Carla Hayden, former director of Baltimore’s Enoch Pratt Free Library, shared her thoughts on the expansion of digital access to libraries, “a treasure chest just waiting to be opened,” with audiences at UMBC in April.

Hayden recounted meeting with then-President Barack Obama before her nomination. Together, at the Library of Congress, they viewed personal letters that Rosa Parks wrote after her arrest in Montgomery, Alabama in 1955 for refusing to give up her bus seat and discussed the immense potential of historical records to directly inform, affirm, and inspire. What was needed, he expressed, was someone to bring the library’s 160 million items directly to the public.

In her new role, Hayden resolved to open the “treasure chest” for the nation, taking to Twitter with an open invitation for people to discover the library’s offerings. After all, Hayden noted, “This wonderful treasure chest is just a mausoleum if people can’t read and see [what’s inside].”

Many know about Thomas Jefferson’s handwritten draft of the Declaration of Independence and Abraham Lincoln’s Gettysburg Address. Fewer know about the personal correspondence between Jackie Robinson and scout Branch Rickey or the letters Sigmund Freud and Albert Einstein wrote to one another. It’s these discoveries that affirm for her that digital access is a core part of her mission, and that of the library itself.

“This is America’s library. This is your library,” Hayden shared. “We want to be part of people’s lives.”

Read more about Hayden’s visit to UMBC at UMBC News.

Tech for All Seasons

At the Keith R. Porter Imaging Facility (KPIF), a  team of undergraduates becomes the first to observe a new type of phage—a tiny virus that infects bacterial cells. Students view images of the robot-like virus formed by a high-powered microscope on a computer screen, bantering about what to name their discovery.

Meanwhile at Research Graphics (RG), a Ph.D. student produces an animation she’ll use during her thesis defense. Nearby at the Molecular Characterization and Analysis Complex (MCAC), staff from a Baltimore startup define the structure of a molecule they’ve synthesized, and at the Nano-Imaging Facility (NIF), electrical engineering faculty analyze a novel nanomaterial they’ve created. Down the lane, a 90-camera setup in a white room creates a 3D digital model of Baltimore City as it was in 1815 at the Imaging Research Center (IRC), and a curved wall plus a virtual reality headset allows visitors to immerse themselves in data visualizations at the π2 Hybrid Reality Lab.

If this all sounds like a futuristic collection of high-tech labs, it is—except they exist right now at UMBC, and they’re here to support the scientific community on and off campus.

Tools in the labs “are all about the most fundamental aspect of science—observation,” says Dean Bill LaCourse, of the College of Natural and Mathematical Sciences (CNMS). A project 20 years in the making, the four facilities housed within CNMS (KPIF, MCAC, RG, and NIF) allow researchers to “leverage and extend our capabilities so we can look at everything from the atom to the ends of the universe.”

“The leaders of these facilities bring their expertise to your problem and work with you to get somewhere you may not have known you could go,” says Karl Steiner, vice president for research at UMBC. “It’s not the newest and latest instrument that makes a facility successful—it’s the people who run it and work with you.”

One of those people is Tagide deCarvalho, manager of the KPIF, who stresses the teaching and learning aspects of the facilities. “I’m really interested in helping people at all levels,” she shares, “from sample prep, to instrument training, to experimental design.”

Joshua Wilhide, manager of the MCAC, emphasized that the goals of the facilities extend beyond generating results researchers can publish. “We are a university—at the end of the day we have to look at how we’re teaching the next generation,” he shared.

“The instrumentation available and expertise offered by the staff allowed me to take an idea and see it to completion,” shares Gregory Winter Ph.D. ‘16, chemistry, who completed the entirety of his doctoral research at the MCAC. He adds, “The interdisciplinary exposure really improved my skill set as an analytical chemist.” The MCAC can also contribute to personal growth. “The MCAC instills a sense of camaraderie, making it easier to persevere through any setbacks in the research or juggling a busy class schedule,” shares Chloe Kwon ‘16, biological sciences. “The MCAC is a tremendous learning environment.”

But UMBC’s high-tech, interdisciplinary facilities aren’t confined to CNMS. At the π2 Hybrid Reality Lab, opened in 2016 and housed within the College of Engineering and Information Technology, it’s possible to walk around a model of neural networks in the brain or a 3D shape defined by mathematical equations. The π2 lab also creates opportunities to investigate virtual reality technology itself. It brings together tools “that will allow humans and the computer to augment each other,” says Jian Chen, assistant professor of computer science and electrical engineering, who spearheaded development of the lab.

The IRC, housed within the College of Arts, Humanities, and Social Sciences, develops and tests innovative ways to use media in research. Lee Boot, IRC director, says the IRC is dedicated to studying media itself, including how we interact with and are influenced by it. He shares, “We collaborate with media researchers to do a better job of bringing this topic to life in a new way.”

Every core facility at UMBC ultimately exists to serve the community. Jeffrey Gardner, assistant professor of biological sciences, is another beneficiary. He’s one of few faculty outside of chemistry who have taken significant advantage of the MCAC. “Josh [Wilhide] and his team have been very valuable and continue to contribute to the success of my lab,” he shares. “It is an excellent resource to have on the UMBC campus.” 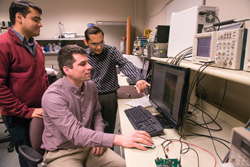