Creating a Literary Space for the ‘Nobodies’

A literary magazine with Taco Bell as its touchstone? It’s actually not as cheesy as it sounds. Unwrap one of the two existing volumes and find: An essay that examines the Taco Bell Chalupa and its relationship to NBA basketball. A poem that goes into a Taco Bell bathroom stall to look at addiction. A Crunch Wrap Medical Chart written by a nursing student.

That an American studies alum created a literary magazine centered on a shared piece of Americana—the fast food chain Taco Bell—should surprise no one. After all, MM Carrigan ’04, founder of Taco Bell Quarterly, often tells people that an American studies (AMST) degree “taught me how to consider, examine, think.” Carrigan uses this foundation in creative writing by “telling the stories of objects and places, and rigorously examining how they operate inside of me. That’s also a description of AMST, in a nutshell.”

UMBC Magazine: How would you describe Taco Bell Quarterly to your mom?
MM Carrigan: Well, my mom always wished for me to create something popular. I think many writers will relate to the idea that our moms just want us to write one of those best sellers or make millions self publishing on Amazon. So I would excitedly tell her, Mom: I made a popular Taco Bell magazine where all the writing is about Taco Bell!

UMBC: Now, how would you describe it to Taco Bell executives?
MC: The New Yorker covered in nacho cheese.

UMBC: When did the idea occur to you to start a literary publication devoted to this fast food restaurant?
MC: In the spring of 2019. One of those late morning ideas after the second cup of coffee hits.

UMBC: Your first two volumes have been prolific! Have you been surprised by the variety of ways people can write about Taco Bell?
MC: Not surprised—I trust writers, I trust in the brilliance of writers. As writers, we continuously approach the same subjects over and over: love, grief, loneliness. I believe Taco Bell is another one of those subjects we can approach over and over.

UMBC: What’s one or two of your favorite pieces?
MC: From Volume 2, Jake Bailey’s “Psychosis at the Bell” excited me, a punk poem exploring schizophrenia and Taco Bell. Terry Horstman’s “Malik for the Win,” is a traditional piece of longform sports writing, through the lens of a basketball Taco Bell promotion. I just love how we get a range of writing.

UMBC: In another interview, you mention being surprised that people took the first call for submissions seriously—why do you think they did?
MC: I was a nobody. I didn’t have a large platform or back catalog of clever tweets. I was just a single writer, with an absurd idea. There isn’t really a space or community for the “nobodies,” so when I invited them to come hang in the metaphorical parking lot of a Taco Bell, I think writers latched on right away.

UMBC: In a time where our country seems endlessly divided over life-or-death issues, Taco Bell feels like a universal, shared American experience. How do you think we can foster more shared experiences like this?
MC: We used to gather around the television to watch a man walk on the moon, or Michael Jackson moonwalk. We shared those cultural moments together. But as our interests and lives become increasingly niche, we seem to only share large scale tragedies together.  We must continue to seek out those places, experiences, objects we can still share as a whole. We must look in surprising places.

UMBC: What sort of writing did you do while at UMBC?
MC: I dabbled in bad poetry and short stories. But as weird as it sounds, I found my voice writing American studies papers. There were never any tests in AMST. It was all writing, all talking, all the time. I took a lot more creative liberties in my prose than I should have in academic papers, but I always received the nicest feedback from professors telling me how much they enjoyed reading my work.

I could have walked away jaded after studying the broad history of American systems, institutions, and culture. Instead, I walked away wanting to tell these stories in dynamic ways.

UMBC: Did any one faculty or staff member encourage you in a way that’s stuck with you?
MC: I’m very lucky to have been taught by such a dynamic, passionate group of American studies professors in the early 2000s. A moment that sticks with me, is Dr. Ed Orser reading a passage from a book, and weeping in front of the class, so moved by what he had read. That was the passion and emotion they brought to the material. I could have walked away jaded after studying the broad history of American systems, institutions, and culture. Instead, I walked away wanting to tell these stories in dynamic ways.

UMBC: Other than submitting to Taco Bell Quarterly, what’s advice you’d give to upcoming graduates interested in the arts?
MC: Live mas, dream mas. Your dreams are heavy to carry. It would be easier to discard them, and go into something more practical. You’re more of a workhorse, so keep lugging, keep dreaming. You’ll be good. 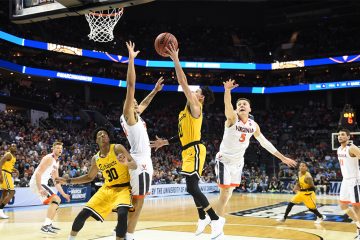