Join us as we celebrate the amazing work our students do during the Undergraduate Research and Creative Achievement Day (URCAD) on Wednesday, April 23, 2014. URCAD celebrates research, scholarship and creative work carried out by UMBC undergraduates across all majors and areas of study.

The event will also feature as its guest speaker alumnus Corey Fleischer ’05, ’08 MS Mechanical Engineering, who is Senior Mechanical Engineer at Lockheed Martin. In 2013 Corey was chosen to be part of Discovery Channel’s “The Big Brain Theory: Pure Genius.” He participated in several challenges that put his engineering skills to the test. In the final challenge, Corey’s team had to build a bridge to span a thirty-four-foot gorge. The bridge had to be mobile; all of the components had to fit in the back of a pick-up truck. The team had to build the bridge and prove that a truck could drive over it. After prevailing over nine other talented engineers, Corey won the competition.

Learn more and join us on April 23! 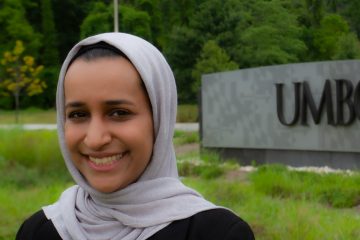