Alum Helps Budding Soccer Players “Get on the Bus” 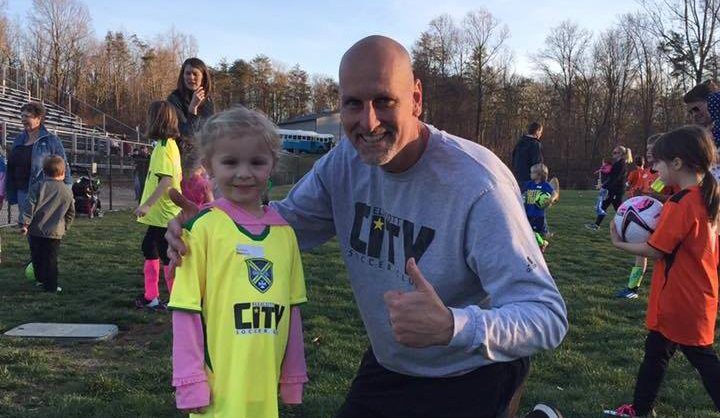 When Tim Ryerson ’94, INDS, founded Ellicott City Soccer Club (ECSC) back in 2014, he noticed something: there were pockets of Howard County that weren’t signing up. He did a little digging, and realized that in spite of the fact that Howard County is chockfull of mid- and upper-middle class families, there are also Title 1 schools scattered throughout—13 of them to be exact.

Soccer tends to fall into the “pay to play” category. Travel programs run upwards of $3,000 a year, even more when you add in hotels, meals, and travel to and from far-flung games. Even recreation-level programs don’t come cheap, running at least a couple of hundred dollars.

Ryerson knew what an important factor soccer had been in his own life. He played under coach Pete Caringi, serving as captain his senior year and going on to a 15-3-1 season. “Coach Caringi is the number-one influencer on my life other than my family,” says Ryerson. “He allowed me to build the work ethic to create different verticals in soccer.”

As his wheels turned on the soccer equity issue in Howard County, Ryerson learned that even more than the cost to play, transportation to and from practices is a huge barrier for lower income families. He was inspired to make a change. “There was a local contest awarding grant money for ideas to help the community,” he says. “I submitted a concept, but didn’t win.”

The notion of a way to somehow make soccer affordable and doable for low-income families stuck with Ryerson, and he decided to turn it into reality. In 2018, he launched a pilot “Get on the Bus,” program with the financial support of families already in the ECSC club.

GOTB works like this: Kids in target schools apply and are selected based on needs and merit. If selected, they receive after-school homework help from certified educators and a healthy snack; bus transportation to and from soccer practice; and all soccer apparel, including cleats and a ball.

After its initial year, where it provided these benefits to 41 elementary school students, Ryerson applied for and received the Maryland State Youth Soccer Association’s “Grassroots Futures Award,” providing GOTB with funding to continue and expand.  “U.S. Soccer then got wind, and they have awarded us another grant, so now we’re able to include states beyond Maryland,” Ryerson explains. “We’ve been able to move into four states and now we’ve got people calling from all over to get involved.”

Currently kids in California, Nevada and Connecticut, in addition to Maryland, are involved and benefitting from the program. Nancy Thompson, principal at Talbott Springs Elementary School in Columbia, has been involved since the start. “We offer it to fourth and fifth graders at our school,” she says. “We cap it at 12 students, and ask our recess monitors and para-educators to help us identify potential candidates.”

From there Thompson vets the students on financial need and then encourages them to apply. “We’ve got kids out on our playground who love the sport but can’t afford to play,” she says. “Tim has been very intentional in helping give them an opportunity.”

Twin 13-year olds Justin and Jordin Lopez have taken full advantage of the program. Originally selected in elementary school, the brothers have since developed enough skill to move onto one of the travel teams. “It makes me so happy to be able to play more,” says Justin. “In the past, I could only play pick-up games at the park or on the playground.”

Ryerson says that part of the U.S. Soccer grant money is for just this purpose—to identify talent and help foster it up the travel program pipeline. “These are kids who would never be identified otherwise,” he says. “From our original 41 kids, we’ve been able to move six onto the travel level.”

Thompson says the kids in her school who participate beam with pride. “They used to see kids wearing their club shirts at school and know they couldn’t be part of that,” she says. “Now they come to school in theirs with big smiles on their faces.”