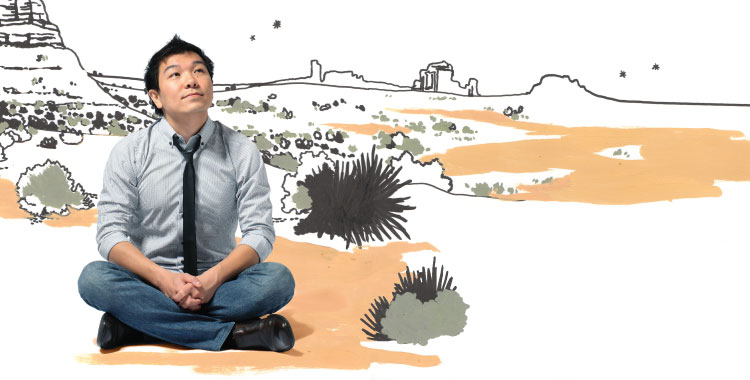 British writer and scientist Arthur C. Clarke once wrote that “any sufficiently advanced technology is indistinguishable from magic.”

And for many of us, that’s exactly how the beeps and pings and connecting dings that keep our schedules, steer our cars to the right destination, and even maintain our bonds with family and friends over great distances seem to work. Like magic.

But to the humans behind the technologies – including Silicon Valley-based UMBC alumni at Apple and Google – it’s anything but abracadabra. It’s a combination of hard work, entrepreneurial drive and visionary imagination at its geekish best.

Let’s meet some of the minds behind the magic of our technologies. Just about anything can inspire an idea. It’s up to engineers like Chen to bring them to life.

How a UMBC alumnus found more than (voice) recognition for his work on the iPhone’s enigmatic Siri technology.

Sometimes, Harry Chen needs to get away. Far away.

When he’s surrounded by the sands of Death Valley, California, even the GPS can’t find him. He can’t check his email, or video chat with his parents in Hong Kong, or stream music from his favorite Pandora station. And he likes that solitude.

“You stay out there, and when you come back, you see such a big contrast of civilization,” he continues. “And it makes you appreciate life a lot more. Everything we created – one way or another – is kind of superficial, but also kind of essential.”

In a world where computing has left the desktop and lives in the clouds, Chen is a bit of a tech superstar. The work that he and his colleagues have done makes it easy for everyone from tweeners to grandfolks to whisper wishes into the palms of their hands to find the closest pizza, send an email or solve a math problem.

Reflecting on his short-yet-impressive career, the energetic 35-year-old software engineer is quick to note the importance of the nearly ten years he spent at UMBC. He says that the people and the environment of discovery at the university helped shaped him into the kind of thinker capable of seeing models and years ahead to the next cool thing.

Like many blossoming tech geeks in the early 1990s, Chen first contemplated the inner workings of computers as a teenager, sitting at home in Hong Kong, his thumbs occupied by the bright red buttons of that era’s ubiquitous Nintendo controller.

“While I was playing, I’d get so curious. How did all those characters come about? I started thinking about how some games would make very predictable moves, and why some are not predictable at all,” he says. “Later on, my dad bought me a computer…and the games on that were sort of like the ones with a snake going in different directions. It made me very interested in understanding more about computer instructions.”

When Chen left home for Towson University in 1994, the world of web-based computing was just beginning to blossom. At the urging of his parents, he began a course of study in pharmacy, but a job opening at the campus library allowed Chen to help customers with computers. He started building simple websites with his friends. After taking a few classes, Chen discovered he had an aptitude for programming.

Suddenly, the future – including a transfer to UMBC – seemed obvious to him. It didn’t take Chen long to make himself at home in the university’s computer science department, where he turned artificial intelligence algorithms into Java code for computer science research projects, won highly-sought internships at Hewlett-Packard, and generally wowed his peers.

“One thing we always liked so much about Harry is that he liked to charge into things,” says Dr. Tim Finin, a professor of computer science and electrical engineering who specializes in artificial intelligence and who served as Chen’s Ph.D. advisor. “He was not afraid to just drop in and start working on something.”

At the time, many of UMBC’s computer science researchers focused on pervasive computing – which aims to unobtrusively connect and share data between the many devices in our lives. Chen took to it like a teen to texting, and reveled in collaborating with fellow students to test new ideas.

“Harry was, and probably still is, very good at that level. He could very effortlessly turn ideas into working prototypes,” says Finin. “It’s a really significant skill to be able to have an idea and then very quickly test it out…to be able to implement enough of it to get some feedback to know whether it’s a brilliant idea, whether it’s something that will pan out.”

The Smartest Room in the Building Many computer science students at UMBC take jobs right after they finish undergraduate studies. But an iffy job market in the late 1990s and then the dot.com bubble’s burst a few years later kept Chen in school.

Chen’s decision to wait to test the market turned out to be a good one. He used that time to develop a concept that helped shape his future research.

Imagine a room that answers your questions, or anticipates your needs and then fulfills them. Chen imagined that room – and then figured out how it might be brought to life.

“The graduate student’s life is really about exploration and to be free to identify your interests,” he says. “It’s almost like an accident when you find something you really like to work on and you just know it.”

Chen had spent some time interning at the Hewlett-Packard Labs, which were – at the time – at the forefront of mobile computing research and development. So when Chen returned to UMBC, he figured out what he wanted to design: a conference room broker. This system would retrieve and translate data from the devices within the room itself to solve problems for occupants while also considering user-privacy issues.

“So you walk into a meeting room,” Chen explains, “and the room understands how many people are in that room, what those people do…so the room says, ‘Oh, there’s a projector,’ and the projector would say, ‘I want to show a PowerPoint presentation. I can do that.’”

The smart room would also locate the presentation on Chen’s phone, download it, and show it – after automatically darkening the room. It might know that one of the meeting attendees wants a copy of the PowerPoint, and then simply download it to their phone. The room might even detect that an attendee’s hotel room is several miles away – and offer to call them a taxi.

“The idea is that people will use technology without thinking about it, which is just like you pick up chopsticks or a utensil and you just use it, you don’t think about it,” he says. “So that’s an idea, to try to encourage people to build technology for everyday people, to solve everyday problems.”

Imagining this room would help Chen shape his later work.

Following graduation from UMBC, both Chen and his wife Gigi Yim, who earned a bachelor’s and a master’s degree in information systems from UMBC in 2004 and 2007, pursued jobs in the Baltimore area. They even bought a house.

But the lure of Silicon Valley – and the fast-paced, creative life it offered – called to Chen.

“At one point, I thought: life is too short. I woke up one morning and I wrote my wife an essay and I said these are the reasons why we should just move to the West Coast,” he says, smiling. “Kind of like writing a paper: these are my reasons. I sent the email in the morning, and in the evening, I come home, and she says, ‘OK. Let’s do it.’”

Within days, they were looking for new jobs and making plans to move west. Yim took a job at Netflix, and Chen wound up at a vaguely-named startup working on a secret project involving voice recognition. (This startup – Siri – would later be bought by Apple.)

Right away, Chen felt confident they had made the right choice.“There’s a mentality here among a lot of people…a sort of hunger drive to make something” in Silicon Valley. “I always feel like you capture people’s smartness in thin air here,” he adds. “Somehow, you just breathe in people’s knowledge.”

“Harry, from day one, was pretty clear. Silicon Valley was where he wanted to end up,” says Dr. Anupam Joshi, a professor of computer science and another of Chen’s graduate school advisors. He observes that some students simply crave the risk and reward of the Silicon Valley environment.

“Some of it could be – for all we know – genetic hard wiring,” Joshi says. “That is why some people become race car drivers and others, like me, drive five miles below the posted speed limit.”

Drive down Route 101 from San Francisco, and you see signs of our burgeoning tech civilization everywhere.

Billboards touting the latest cloud software. Silver-sided buildings in seemingly endless business parks that are home to startup upon startup. Even the street names themselves – like Apple’s famous Infinite Loop, or the punningly named Disk Drive in San Jose – conjure images of innovation and dreams.

Strolling around the manicured Apple campus in Cupertino, California, Chen speaks quickly. Excitedly. He says Silicon Valley is a place where ideas can be imagined without fear, where innovation is rewarded.

“People here have a passion for technology and innovation,” he says. “They want to change the world. They take risks. Most of the time they fail, but sometimes they succeed. So they step out, dream up some crazy idea and say ‘If I fail, fine. I’ll dream another one.’”

Even so, Chen acknowledges that nothing happens overnight. If you think about the gadgets that have occupied your pockets over the last 10 years, the technology required to power them crawled more than it leapt. The palm-held organizers of the mid-’90s, for example, were little more than tiny personal computers; today’s equivalent relies on web networking and interaction with other devices. Who knows what tomorrow’s devices will look like?

“Especially in the [artificial intelligence] research field, you can’t just jump to the dream right away,” Chen says. “You kind of have to think about yourself climbing a mountain. You have to do the work to get up there…you can’t just shoot straight up because that’s impossible. And once in a while you will have to make a detour, and because certain technology or culture has changed, you have to adapt to that.”

Back at UMBC, Joshi acknowledges that Chen’s metaphor is rooted in the reality of how creativity works. “That’s part of the fascination of this field, I think, going back to the creative process,” he says. “So much is yet not done. So much power is available through the computational process…we just have to channel it. We’ve barely scratched the surface.”

For Chen, it’s often enough just to see these products in use by the people he loves. When he was an undergraduate student, he communicated with his parents in Hong Kong by hand-written letter; today, he uses FaceTime to video chat with them whenever he wants.

Chen isn’t able to discuss what he’s working on now at Apple – a company known for keeping a tight leash on its ideas and products until they are introduced. But when you ask Siri a question on your new iPhone and get an answer, consider yourself at the doorway of Chen’s smart room, engaging with his work.